Nice game!  For me, the game was hardest near the beginning when the character was weak and I was still getting used to the controls.  The mechanics felt somewhat clunky, but I kind of got used to it after a while.  The graphics and setting added zest to the experience, and I liked by how the map design l a sense of exploration even within the game's small scale.  The overall game length felt good for playing in a single sitting, which a satisfying level of challenge.  Having a gauntlet of regular enemies as the final boss battle was kind of disappointing, but I guess that's because this was made in a limited amount of time for a game jam.

I never played the original game this is based on so I don't whether it successfully captured the spirit of the original, but I think this game stands on its own as a nice bite-sized action-platformer.

went past the area where it said "claim your destiny" then it sent me to the main menu, i clicked z and now im at the start and cant move

Nice game! The visuals are very nice to me

Controls are really weird to me. Speed is too fast and it's hard to get to hitboxes

educate yourself on pico8

idk if it's intentional, but if you slash upwards right after you jump, you go three times as far!
anyways it's a great game :D

and i may or may not have exploited it into oblivon

cool demake, the visuals are great.

Reply
Jared the Fool300 days ago

The game doesn't appear to start for me

anyone know if its possible to save progress?

up at a bench

doesn't seem to work for me

only in original hollow knight

nah it works in this one too.

This games controls are SOOOO weird! It seems like I land a move, but it never actually lands. Plus, The fly enemies are WAY to annoying. Sometimes, there's a delay when I want to attack! The move sometimes NEVER lands. Hopefully, the controls can be updated (along with other quality-of-life improvements) in a future update. Oh, I forgot to mention that you did a good job with this game.

attack delay: that bc you have a bad computer.

the move not landing: the actual white part of the slash is the attack.

Hello. I am an aspiring game designer making a metroidvania in Pico-8. I was wondering if I could use some of your code in my game. (With credit of course)

the game doesnt react to my controls pls help 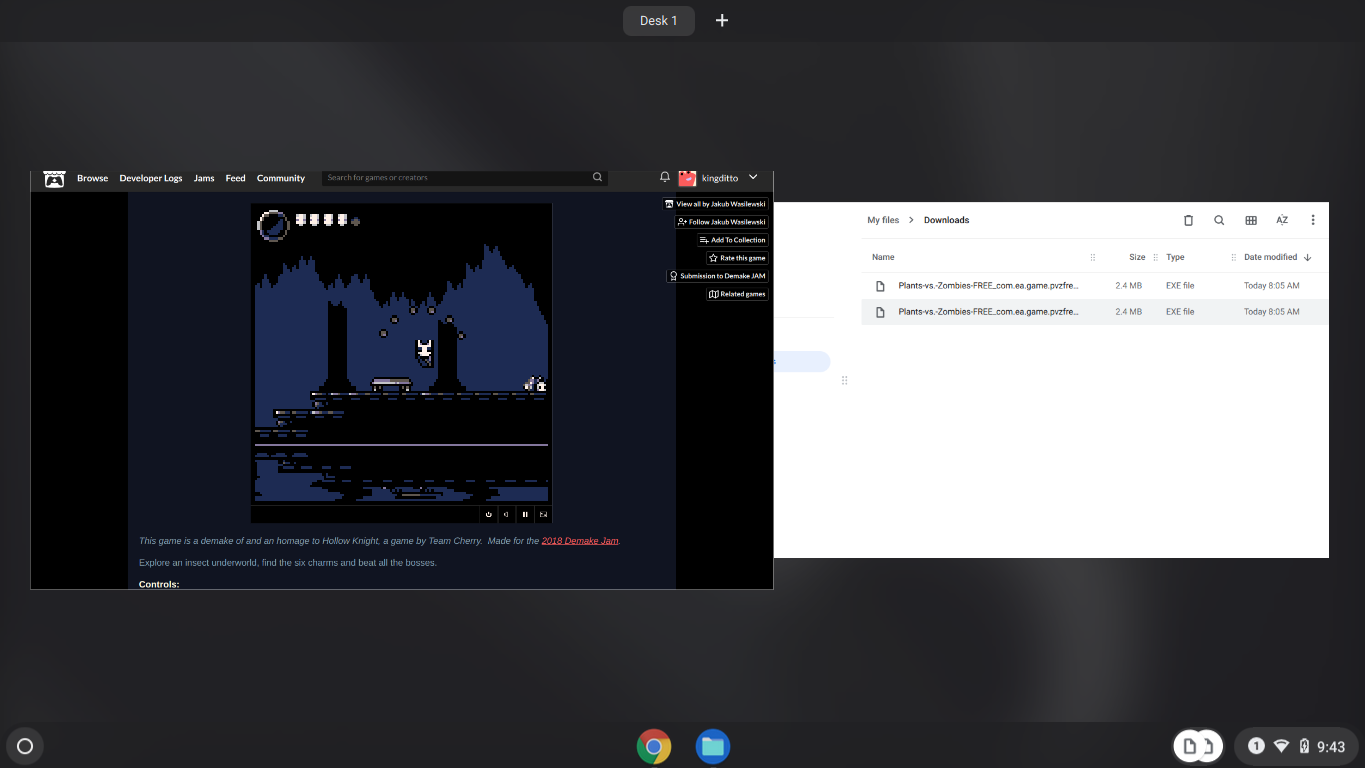 German/French keyboard, maybe? If so, just press whatever key is in the same space as Z in a QWERTY keyboard (or just can use C/V in place of Z/X) :)

I just got PICO-8, when I load it however it says Runtime error line 63 tab 0

It appears to be a bug on the PICO-8 end, introduced in a recent update. It affects most of my carts and I'd have to work around it by changing the carts one by one, so for now I contacted Zep (the creator of PICO-8) to see if I can get it fixed in a future version.

This cart will work fine in any 0.2.0 or earlier version (you can get those at https://www.lexaloffle.com/games.php?page=archive)

I think that's the problem, since I think I have 0.2.1. Thanks for the list

I know this comment is very late, considering the game jam was in 2018, but this is a great game. The platforming to charms is pretty difficult but fun to get through, and the boss battles weren't impossibly hard.

Thanks! Difficulty is really hard to get right in jam games - you have basically no time for playtesting, and the only person testing the game (you) has so much practice that it's very easy to make things almost impossible for new players :)

I also have a question about the gameplay, sometimes if you look up and press attack and jump at the same time, the knight goes flying up to the top of the screen. I think someone mentioned this in the cart you posted on Lexaloffle as well.

Possibly a bug? This game has quite a lot of quick and dirty code ;)

Hi, I have been working on a version of this with a handful of sprite changes, I was wondering if I could post it, giving proper credit of course?

Cool, but combat and movement is slippery and ruins the game. I'd advise giving the dash a separate button and removing the annoying little steps forward the knight makes when striking, it makes you hit an enemy and them go straight into them without wanting to. Also, it would be a great improvement if the movements weren't momentum based, it makes platforming a nightmare. I can't complain too much though, I'm just happy to see a hollow knight fan game.

So I just played further into this game, and I must say that the wall climb ability is a nightmare. It actually makes platforming harder. Also, sometimes I try to heal but I don't have quite enough soul, so I just drain my soul but don't get a mask. I like the art and can see that this has lots of effort put into it, but it REALLY needs work.

you do realize that this is a jam game which probably won't get updated, right?

Yes, and that was meant as constructive criticism, I'm sorry if it came off as angry. I really like this game, and I'm really happy to see a Hollow Knight demake, I couldn't find any for a while. I did not know it was a jam game. In that case, this is amazing considering it was made in a limited amount of time. Good work!

No worries - feedback is valuable, even for a jam game :) As you both noticed, it's unlikely I'll ever update this - but it's never a problem hearing what others think, even if it's negative. I actually agree with a lot of the issues - but I'm still really happy with the game considering the whole thing was done in 6 days ;)

Great fun! Works well in browser but when I download it, I get a black screen after leaving the first room.

That's weird - what PICO-8 version is this on, and is this for the minified .png or editable .p8 version?

This is on the latest version of pico8, and with both versions of the cartridge

Beautiful pixel art, but the gravity is too big, and controls feel slippery. This makes falling puzzles excruciating to the point of being no fun :-/

finished with 4/6 charms, not doing again!! but only because its long. great game!

Man, the gravity is faster in this game. I have to respond earlier to prevent falling in wrong spot.

great job looks amazing and the controls are also amazing

I was just looking through some of your past work after admiring your progress on Slipways. I'd seen some of your other pico-8 projects but hadn't come across this. Amazing demake! I didn't see this on the BBS though. Is there a p8 cartridge somewhere, or maybe a way to convert the JS version to p8?

It's not on the BBS for some reason - could have sworn I've uploaded it there. I'll have to submit it one of these days, but I'd have to minify it so it works in the .png format etc.

For now, here is a link to the .p8 if you're curious: https://we.tl/t-tSLkvZkN6o

Thanks! The link is indeed dead by now. Any chance you could re-share it or upload it to the BBS? Thanks and keep up the great work:)

i wish it wasn't so difficult i understand it is a game jam but you could have eased up on the spikes dude. great overall good job.

why is it so hard? Just seems like wasted potential. I mean, the art and style and the original idea is the best!!!!! But, It's too hard and there are too many level hazards. But other and that, It's great!

wow this is amazing

the game is also harder than the original

i really really love this game and i would just love to see some huge boss it would be the coolest thing. this is by far my favourite game on itch.io and favourite pico 8 game a boss would just be amazing.

i would love to see more added on to this game as i can only see the original and not play it because i have a chrome book please please add more on to this game i, love it

i have beat the origanel game and its my number 1 game of all time, its nice to see a 8 bit type game of it that isnt bad and is fun to play. great work on this

how do I do that huge jump?

This is so beautiful! (and so hard!)

Are there no sound effects? I can hear the initial pico8 chime, but nothing after that...

Do we really need another dark souls? jk but I found it really hard, and there's no save so I can't get back to playing my old save

This is really great job! Do you plan to make the source code available or perhaps i can buy it? Would help me alot to see how you make some certain functions work :)

I definitely want to release the source code for the project! I'd like to properly finish it first, for a post-compo version with sound and a slightly larger and better designed world. Going through some crazy life changes right now, though, so I'm not sure I'll have the time to do it all soon.