Delve down into the dimly lit corridors of Dank Tomb and see if you can solve all its puzzles. Find the seven golden idols hidden within and uncover the forgotten story of an ancient king gone mad.

Dank Tomb is a pay-what-you-want title, which means that if you prefer to play it for free, it's perfectly okay to do so. But I'd really appreciate it a lot if you choose to click the "support this game" button above! To show you how much I appreciate it, there is even an expedition journal with additional Dank Tomb story available for download for those who choose to support the game. Source code is also available for PICO-8 enthusiasts.

Arrows - walk around, Z/C - jump, X/V - interact/use items.
Gamepads are supported as well, if you prefer to play that way.

If you're stuck, just exit a room and enter it again - it will reset and let you start fresh.

If you'd like to put the game down and return to it later, the game features a special room where you can save your progress. Once you see the "progress saved" message, it's safe to close the browser.

To delete your progress (to get 100% completion on a new playthrough, maybe?), press Escape and select "delete progress" from the in-game menu. Warning: irreversible!

The audio is a joint effort by @itsmerobertk (original music) and @gruber_music (PICO-8 music arrangement and sound effects). Everything else is by @krajzeg.

Very good game. A nice adventure with entertaining story and good content. I like its puzzles and difficulty level.

This game is great! But I can't complete it because of a bug: When I get the relics that look like little spirals (the ones guarded by wall-shots you can't jump past) and then I enter the map room the game freezes. I can repeat this getting either spiral first. The map room saves as intended until I pick up a spiral. They are cursed. I can even get both spirals and then enter the map room but hug the wall and inch my way past the map and out the door on the bottom so the save won't activate. I then come back in and map room freezes. Walking to the center of the room does this. Despite having saved in the map room before the bug, the game doesn't go back to an earlier save. It begins a new game. Restart doesn't load a save then either. I'm on macOSMonterey 12.6.1 and Safari 16.1. I will try Firefox and Chrome next. Just thought you should know. It's awesome! I wish I could see the ending! :)

Sorry to hear that! The bug is kind of surprising, since the game hasn't really been updated or changed since quite a while (years), and that's the first I hear of a saving issue like that.

Using another browser might help - or playing using one of the downloadable executables, if you bought the game. I'm afraid I can't offer much help otherwise, since I don't have the right hardware to try and reproduce this (my Mac is too old for Monterey), and the issue seems to be somewhat specific to your machine.

D'oh! Well it wouldn't be the first time a problem was "specific to my machine!" Since I discovered it, how about naming the bug after me? To report: the map room works fine in Firefox!

I really like the game and I support artists, but I've never bought a Pico-8 game. Do I need to install the PICO-8 Fantasy Console to play it? Cheers! :) 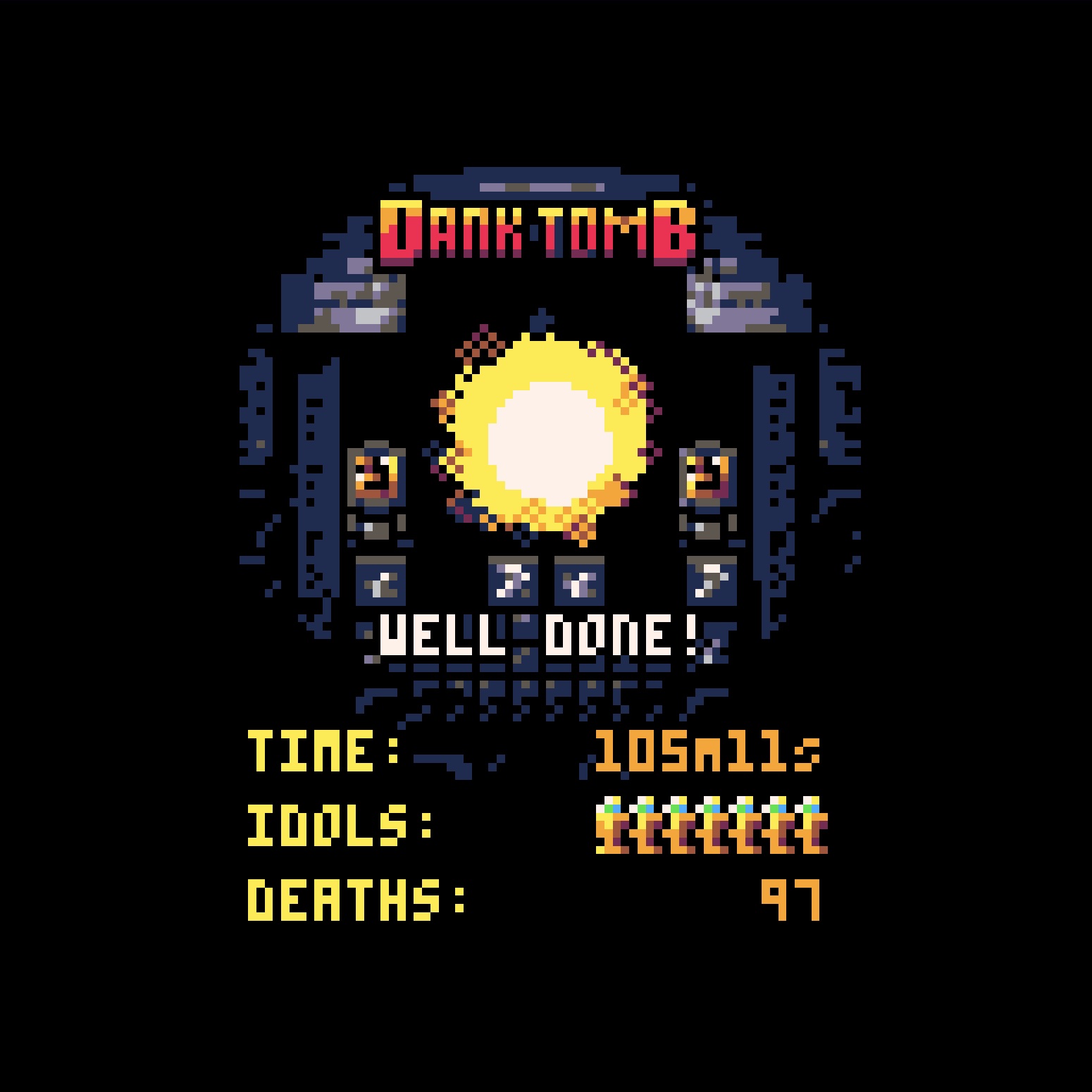 Glad it worked well in Firefox!

Normally, I add Windows/Linux/Mac executables as downloadables for my PICO-8 games, but I see that for some reason I didn't do this for Dank Tomb. I'll make a note of adding those - once they're up, you can play without PICO-8 just by using the standalone executables. I'll try to put up the executables some time next week, since there is really no reason for them to not be here.

If you want to play the original cartridge file, you do need PICO-8 to load it.

A very good puzzle game, I really enjoyed it and also it's free. I recomend it a lo

Amazing, I kind of raged though

just the first part right when you first enter the tomb made me feel like rage quitting! I like this game. :) YOu did a really great job!

It's easy to miss something since it's so dark inside the caves. I guess it makes it all more fun! Great game!

Awesome game. Really, really well done. I loved the focus on puzzle design and exploration as opposed to fighting; speaking of, the puzzles were incredibly clever, and very satisfying to try and work out. The one criticism I have is that the perspective really, REALLY does not work in the game's favor. I constantly found myself accidentally running off ledges, or pushing the wrong object off a cliff just because I was positioned just slightly off, even though it may have appeared that I was positioned correctly. It was bad enough that the final puzzle felt like I was being trolled, because of how precise you needed to be. I feel like if the player had a slightly bigger base of support (meaning they could get a little further out on a ledge without falling off) then this would be a non-issue. That said though, I honestly had a great time with this, and I'll absolutely be coming back. It's just too clever, and too well made not to.

Very nice puzzle game!
Love the colors and the style :3

Can you please make a sequal?

Busy making a sequel to Slipways! :)

But hey, who knows, maybe for the next game :)

I'm excited that on the first run through I only found 5 idols so I get to play it again to find the others. yay

this is the perfect fusion of Mario, Zelda and Metroid

PD: Is the game too difficult in the end or is it just my stupidity?

It can be hard, but it feels easy once its done

honestly I found the last puzzle room way too hard, especially since one mess-up forces you to restart

Pretty neat game! The graphics are just beautiful(all tho sometimes not clear), the music sound's great, and gameplay is really fun.

The light management is simply amazing and the overall setting is quite well done. The first times I played it I never found any idols, but as I was exploring more and the first one appeared, that made me want to explore even more to see what secrets I could find, although I have not finished finding all of them.
It won't have much to do with it, but it made me wonder about other games where the protagonist is an explorer archaeologist and things like Pitfall, La Mulana and Spelunki came to mind, even though they all have completely different mechanics.

this is the dankest pico 8 game ive ever played

Ok, so. I played this game twice. 1 just to try it, the second one to get all idols. I was wondering though, does the 3 poems do something or are they just lore? Thanks for the good game and Happy New Year

There are 12 verses, forming one poem - but yeah, it's just a tiny bit of lore for the persistent :)

It is a really nice touch. I wish you could read the poem during the game to check if you have completed it. I would also have been nice if at the end of the game the number of verses obtained appeared just like the number of idols collected.

This game is a PICO-8 showcase!

I just donated, please do one more fix so it no longer crashes in version 0.2.1B. Since zep promised the API is now stable that hopefully means no more updates necessary.

The version on the BBS/splore doesn't crash for me on PICO-8 0.2.1b. Can you screenshot the crash?

I think I can almost replicate the error. It seems to only appear when I have the cart saved locally by favoriting or saving it and not running directly from splore. I open the first door and walk left to the machines and then back. Then this message pops up. 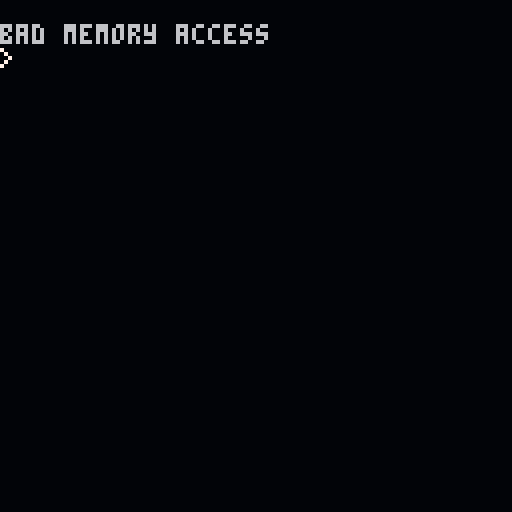 I have the same problem

I'll look into that at some point (really focusing on PC Slipways now), but this looks pretty weird, especially since it only happens on a local cart.

This is a great Game!

would defiantly would recommend

this was a really great game!!!! thank you for this.

The riddles were great and challenging, some difficult, but I'd say it's a perfect difficulty graduation.

Like it but too slow .... maybe a windows build will be faster.....Anyway good atmospheric game

Very much fun!  I like the graphic effect alot :)

Hi, as you noticed, the downloads are just additional materials for the game. If you're not a PICO-8 user, the best way you can play the game currently is right here on the site, with no download necessary. I haven't prepared a standalone version yet.

i just realized. Heck. Now I sound not only stupid but also not informed well. Thanks for the reply. Appreciated it.

no new praises that haven't already been said. just impressive graphics, utilizing the pico-8 in an interesting way, and cleverly designed puzzles. not sure if it was an inspiration, but it felt like a La-Mulana game on pico-8. excellent game!

I found the lower edge of tiles difficult to determine. Many times I knew what I wanted to do and was sure I was in the right position, only to die due to poor placement. Very frustrating and ultimately I gave up after Idol 2 because the platforming wasn't fun for me anymore.

I'd like to see this with some sort of cleaner tileset which fixes that issue.

As a minor side note, the fullscreen mode does not seem to work.

Hey, glad you liked it! The fullscreen mode still works for me, can you tell me what browser you were using so I can fix it?

Maybe it is related, I see this error in the JS console :
TypeError: The expression cannot be converted to return the specified type. dankreleasee.js:133

Awesome game thanks! :D
It's really cool to see that you used up so much of the possible tokens and had to use really short variables!

Really enjoyed until I got stuck here 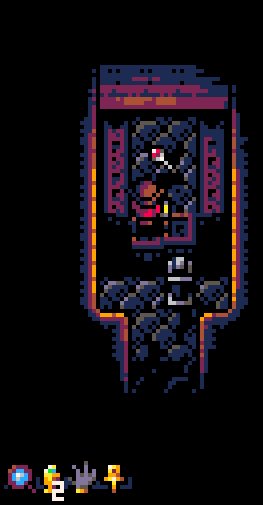 You have to figure out what the wand is for. Hint: It's got a bit more range than the other items :)

This is great! :D

This is better than most games released on Steam now.